I’m always looking for ways to pad out my column without having to play any more of these god-awful indie games, so I say it’s time for a…

Hey, remember that time I said I was making a videogame? Life in the Dorms? It’s still on. The script is basically done, the programming is basically done; the big things we’re working on now are graphics, music, sound effects, and having various members of the GameCola staff test it to make sure we didn’t do anything too stupid, like accidentally introduce stealth and/or combat into an adventure game. It’s practically a videogame already.

You want proof? Here’s a new trailer we just put together, staring yours truly as “guy wearing cardboard head.” Enjoy!

Phew! That is a videogame, isn’t it? Look for it on the Xbox Indie Games channel this fall! Or possibly winter! Or possibly next year! Hopefully not next year. In the meantime, here are some other games you can play, right now. 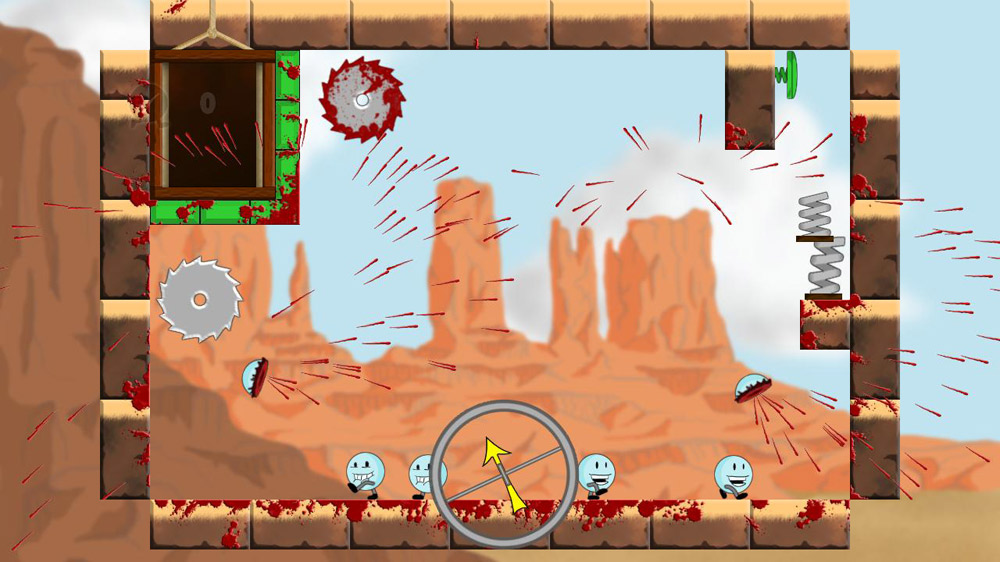 It’s a point-and-tap affair where you have to highlight your cursor over these little blue blob things, and then click to fling them toward an exit door, without “accidentally” slicing them in half. After the first few stages the game starts adding more things for you to worry about, like switches you have to flip and fans whose direction you have to change. All the while the little dudes are mumbling cute things at you—I could’ve sworn I heard one say “I love you very much!”, right before I accidentally sent it pudgy-face-first into a buzz saw. Blood sprays EVERYWHERE when this happens, by the way, coating the stage and everything in it, while the severed, still bleeding halves of your friend go bouncing off-screen. It’s horrific.

Too be honest, it all got a little too complicated for me, but I also don’t like games where I can’t just press A to win. Moreover, I don’t think the Xbox’s thumbstick is really up to the amount of precision this game requires; you have to both aim the critter exactly where you want it to land, and pull back just enough to put the right amount of umph into it. There are options for adjusting the thumbstick’s sensitivity, but they only range from “normal” to “highest,” whereas I found myself needing something more along the lines of “painfully super slow.” The game also has a “profanity slider,” allowing you to change the level of cussing—from “low sodium” to “MSG.” Unfortunately, I have no idea what those terms are supposed to mean within the context of the game. It’s like that time I was at a Tex-Mex restaurant with my parents when I was little, and the bathrooms were labeled “Damas” and “Caballeros,” and I had no idea which one I was allowed to pee in.

All the Bad Parts 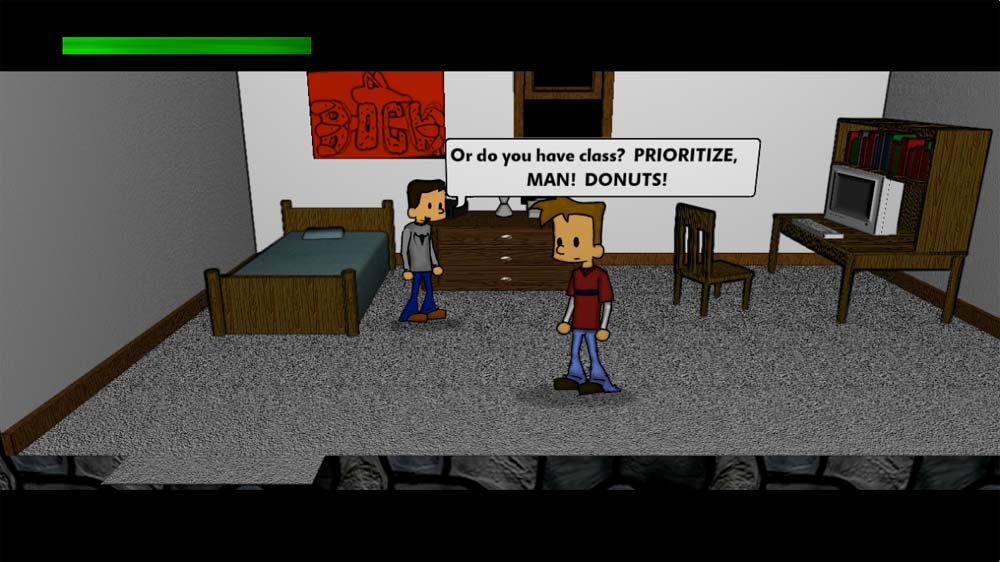 All the Bad Parts brings to mind happy memories of Excruciating Guitar Voyage. Not in tone, or style, but in gameplay; it’s a side-scrolling beat-’em-up adventure game!

I didn’t get too far into All the Bad Parts because, for some unholy reason, there is no save-anywhere feature. I mean, good god, what are we—cavemen?! Ooog no like that. But I did love what I saw of the game. Exploring the labyrinthine high school level is daunting at first, especially when your only direction is “get your notes out of your locker,” and your character is decidedly ignoring any and all lockers you come across. You need the notes because your first quest involves attempting to hand in a class assignment, which you never actually wrote, but as your friend points out—teachers never really read these things, anyway, so it’s not like it matters. All you have to do is gather your notes, find a magazine (so you can rip a page out of it to use as your cover), and come up with a bibliography. SPOILER ALERT! You have to steal one from a box labeled “Really Good Term Papers” in the teachers’ lounge. (Make sure to avoid the other box, though, which is labeled “Really Funny Bad Term Papers.”)

So the adventure parts seem fun, but unfortunately, after two fights the combat in All the Bad Parts was already feeling repetitive. Maybe they shouldn’t have included those bad parts. It’s very kicky and punchy, which is fine in a multiplayer brawler, where half the fun is stealing the PIZZA TIME from your friend even though you’re at full health; but it’s not very conducive to a good single-player experience. You also aren’t allowed to exit an area when any enemies are on-screen—not even, as I learned over and over again, if you yell at the TV about how you don’t wanna fight any more goddamn bugs.

On the plus side, this one time I picked up a dodgeball to throw at someone, and it turned out the dodgeball had a name. “Dave the Dodgeball.” I think that makes this by default one of the best games on XBLIG to-date. 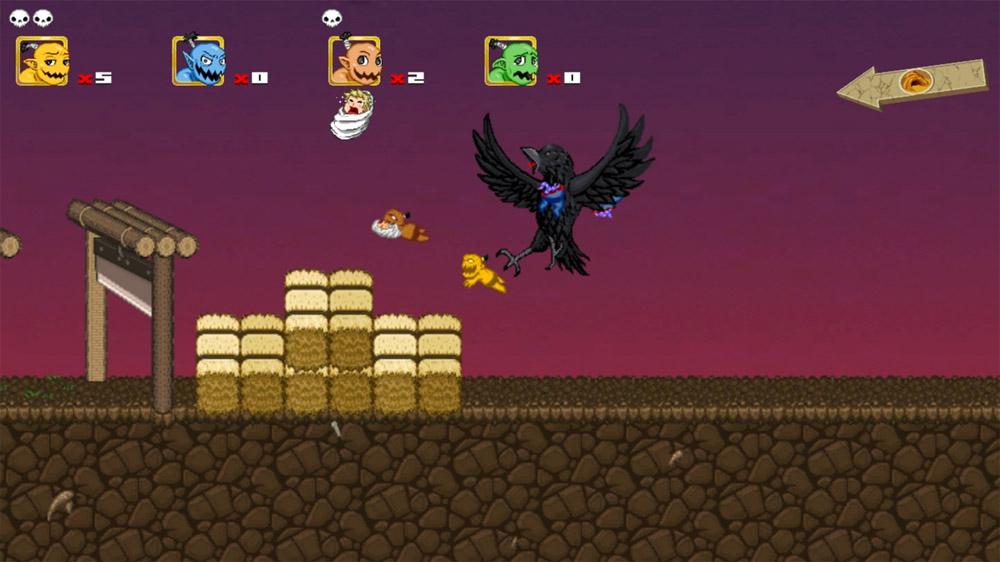 I just hope this isn’t anything like the last game I talked about that had “Quest” in the title.

Kobold’s Quest has an awesome premise for a videogame. You’re not just some hero trying to save the world from doom; in fact, the heroes themselves are the enemies, inasmuch as they’re trying to prevent you from achieving your ultimate goal. That goal: to bring home a fine meal for the kobold king—a meal of human babies. If you don’t bring home enough babies for the kobold king, then you’ll be on the menu, instead—which, as a side note, is a Game Over you’ll want to see played out at least once before you die, just for the dramatic, fear-inspiring remix of “Pop Goes the Weasel” that plays as you’re being served to the king.

Death is pretty brutal in this game. You start off with five lives, but one hit kills. I got a Game Over within the first few enemies I encountered. Other than that, it’s fun, though the one thing that gets me is that, after you collect a baby, you have to bring it back to the beginning of the level. I hate backtracking in games, regardless of whether the game’s narrative doesn’t make any sense without it. I always want to feel like I’m moving forward in a game, and it’s hard to feel that when you’re literally doing not that.

There’s also a multiplayer component, and I have a sneaking suspicion that the game suddenly turns awesome when you’ve got a few friends over; but as a single-player experience…meh. If I’m just going to eat babies all by myself, I don’t need a videogame to do that. 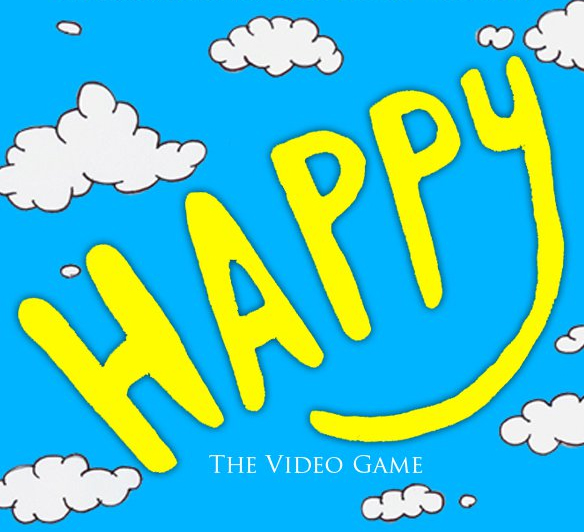 I once read a review of Dragon Quest IX that described it as “a vacation from other games.” Over a year later I still remember that stupid review, because of how completely wrong it was. DQIX is the sort of game you need a break from every 20 minutes or so to get away from the monotony of grinding; it’s the game that finally turned me against turn-based combat forevever.

Why am I bringing it up now? Because HAPPY actually IS a vacation from other videogames. Before we get any further, though, check out this intro video. Fair warning: it may make you sad for the rest of your life.*

I’ve only been able to find this video on YouTube, rather than in-game, which is a shame because it sets the stage for the game so beautifully. HAPPY is—as far as I’m concerned, anyway—a game about a depressed fat guy living in a fantasy world where he uses his inherent roundness to roll around a side-scrolling Seusian landscape. Already you’re hooked. Curved trees and rocks serve as ramps, pink blobs help you fly through the air and chilli peppers (why not?) help you speed up, all in the name of helping this poor guy take his mind off of what I imagine to be his soul-crushing depression. (To really pound in that metaphor, early on in the game you come across a sign post; the way you’re coming from is labeled “nowhere,” and the way you’re going leads to smiles.)

It’s almost like the early levels of Flower in its serenity. It’s just you, rollin’ this fat guy forward to help him forget about his worries and his strife, and as you do that, you’ll find the same happening to you. Plus, if that isn’t enough, when you beat a level, the game draws a happy face on your screen and says “well done!”, while a crowd of unseen supporters cheers you on. Also, there’s cake. I want to hold hands with this game so hard.

HAPPY is an unquestionable must-buy. Why? It’s got the reason right there in the title. (Also, all the profits made from this game are going to an animal rescue.)

You know something? This just might be a landmark day in Pudding history—the first time EVER that I managed to find and play four awesome playable games, all at once. This calls for a celebration:

Thank you for reading. Please buy my game when it comes out.

* Thankfully, we already have a cure for that.

First, let me start this review off by saying that bustin' makes me feel good. What I'm saying is, I'm a huge ghost-head. Some may argue that a movie/franchise game shouldn't be reviewed by a fan of t