I keep going back and forth on whether I keep wanting to keep writing “Minus the Pudding.” On the one hand, the quality of my GameCola writing has been deteriorating lately as a factor of  my being more focused on other projects. On the other, I’m not exactly the only person covering XBLIG anymore; there are plenty of other sites doing it better, and more timely-ey. Sites like Indie Gamer Chick, which I hope to God never reviews Life in the Dorms, because they terrify me, and sites like VVGTV, which I hope to God does, because they contributed to our soundtrack and are therefore appropriately biased.

On the other hand (on the foot?), I also haven’t played any great (or even particularly good) XBLIG games in what feels like a year. Actually, it doesn’t just feel like it; it is, literally, a year, because I couldn’t come with any XBLIG games to nominate for GC’s 2011 year-end awards. And on the other hand (again, foot), Microsoft has seemingly given up completely on XBLIG; in the latest dashboard redesign, they relegated it even further away from anything relevant than they did the last time, to the point where—no joke—it takes 13 button pushes just to find them. In contrast, it takes just one button to, as of this writing, watch a trailer for the Paranormal trilogy. I don’t even know what that is.

Sins of the Flesh 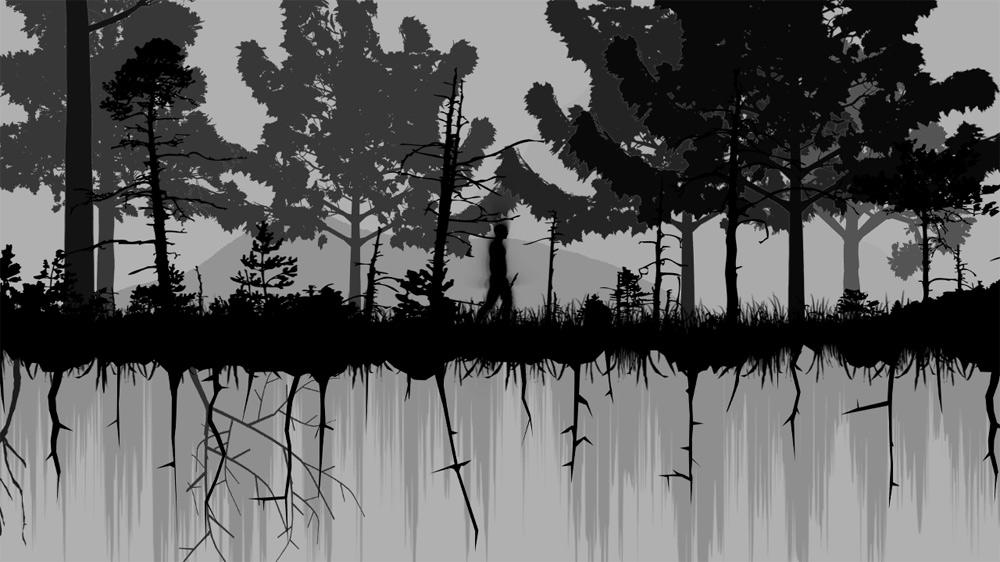 I’m starting to wonder if maybe it’s inappropriate to make jokes at Silver Dollar Games’s expense in literally every single thing I write for GameCola. Sure, they may propagate some of the worst of what XBLIG has to offer, and sure—this is only a rumor—they eat babies; but more and more it seems like they’re trying to branch out and make actual videogames. Or, at least as “videogame” as one can get on XBLIG.

Case in point: Sins of the Flesh.

You start off dead. A haunting little girl’s voice tells you that you need to do everything she says in order to live again. She says you can trust her. A cell phone rings. She tells you not to answer it. Do you? If you don’t, the screen starts fading to black; if you do; an older British man cuts in and blames you for everything bad that’s ever happened in your life. Both characters continue to vie for your attention throughout the game; all the while, your character moves automatically across the screen, while you try to shoot down all the enemies that are trying to drag you down to hell.

I’m a sucker for games that stimulate my ears; it’s the reason I found Bastion so interesting, even though everything else about it isn’t. It’s also the reason why I dug Sins of the Flesh. The gameplay’s simplistic to a fault; even during the eight-minute trial, my thumbs were sore from constantly pressing back and forth on each of the joysticks. Even if you hate the idea of this game, though, you should buy it; that way, maybe the world will never have to suffer another Cassie’s Animal Sounds. 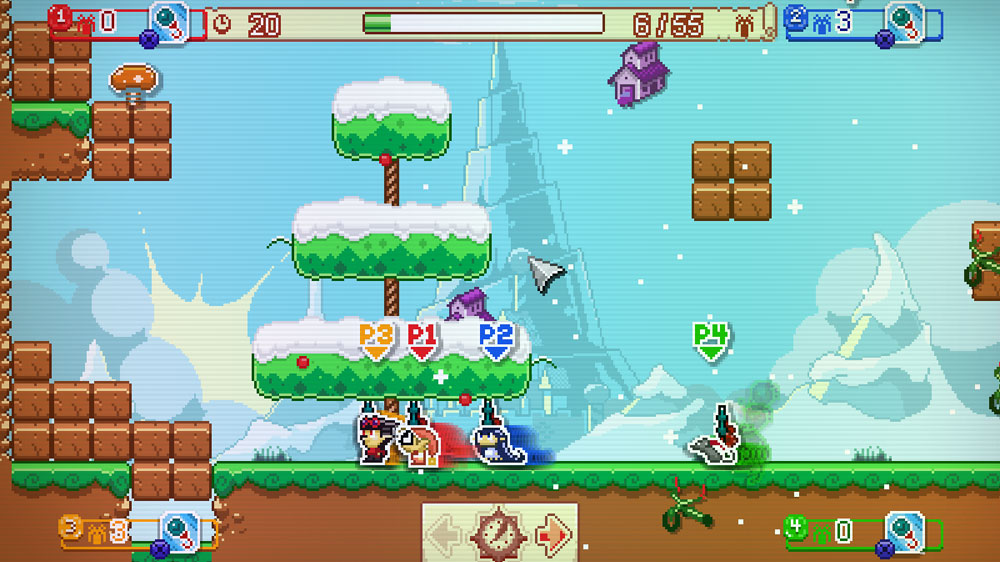 Remember what I said earlier about not being timely? This is a game about wrapping presents for Santa. Oops.

An elf named Elfington. A rat named Cheesums. A Reindeer named Jellybean. What do they all have in common? They all have the best names ever. Also, they’re trying to save Christmas! There’s a present shortage, so they need to operate a present-making machine and—this is almost too wonderful to type—shoot the presents with their “present guns” in order to automatically wrap and then collect them. I just hope someone’s working on a Skyrim mod that includes this weapon as we speak.

The game’s like Smash Bros., with present-guns instead of any other attacks, and also you’re not trying to kill each other. You’re just trying to wrap presents. It’s actually pretty repetitive, too, just like Sins of the Flesh. Apparently it boasts four-player co-op, which should make it more chaotic and, inevitably, more fun. But it also means you’d have to ask three other people to play a game called ElfSquad7 with you. 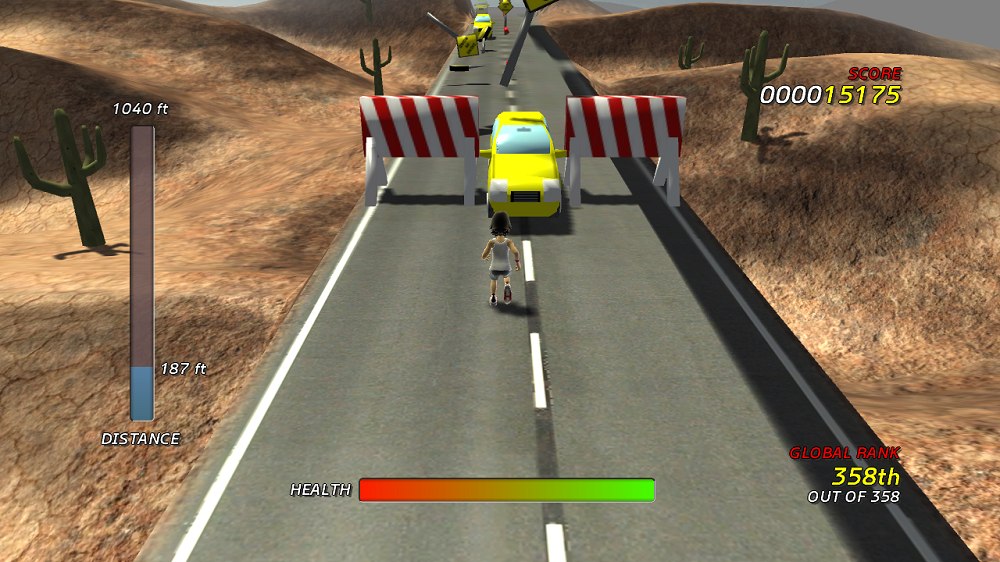 Little-known fact: I’m a runner (or at least, I pretend to be one every morning before work). I don’t talk about it much on GameCola, because this is a videogames website, so I assume, thanks to decades’ worth of stereotyping, that everyone reading it resembles something akin to Jabba the Hutt. So I’ll admit it—I checked this game out not because it looked inherently fun, but because it played to my own interests. (This is also the reason why Back to the Future: The Game is going to get Game of the Year this year: not because it’s the best game, but because it’s Back to the Future. Hey—it worked for Batman before.)

Although it claims to be a “running” game, actual running is the last thing you have to worry about in Extreme Jogging. A lot of the game is just moving from right to left and vice versa to avoid hitting things, though there’s also some strategy involved. For example, jumping. Also not jumping. Also, in the beginning level at least, there’s a soda power-up you can pick up to increase your stamina, which is not something I believe most running organizations would endorse. There’s also these neat Hole in the Wall-style segments where you need to control each of your arms with each the joysticks to fit through the brick wall rather than splat into it.

What really make the game, though, are the obstacles. In the first level, there’s a giant bounder chasing you; later levels have cows, hot air balloons, and goddamn sharks coming after you. It’s just dressing, but it makes what would otherwise be a pretty dull experience…slightly less dull, anyway. 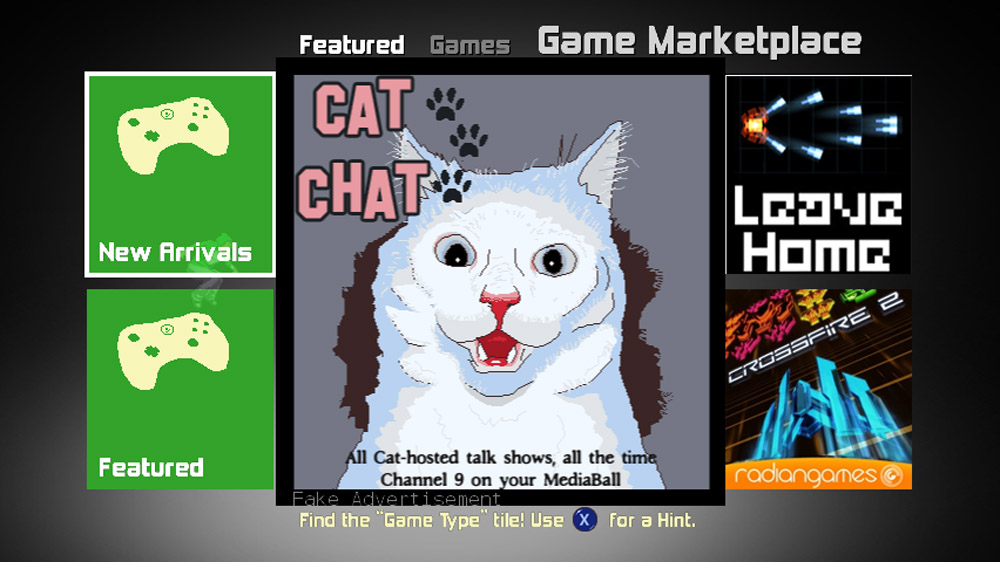 This is a game about how terrible the new dashboard is for XBLIG gamers. Here’s the joke: It’s very difficult to get to the XBLIG section on the dashboard, and also there’s a lot of advertisements. The first part of the game involves navigating through a fake dashboard with a series of fake advertisements (and some for actual XBLIG games—nice touch), until you can find the hidden “Game Type” menu that brings you to the second part.

The second part is a side-scrolling shooter with kittens and football players that are trying to kill you. It’s a lot of the weirdness for weirdness’ sake stuff; kind of like if the GHXYK2 guys put down the drugs and tried to make an actual videogame. The whole thing’s about as one-note joke as it sounds, but there’s some sense of vindication in knowing that someone went to all this trouble to make this point about the new dash.

And they’re probably right—even though they were intentionally trying to make it difficult to find the game within a game, I was still able to find it much more quickly than the actual XBLIG channel on the new dashboard.

…but that’s too depressing a note to end this article on, so here are some sloths taking a bath:

THIS is how you port a game.