Hey, everyone. It’s the Ominous Voice, your source for information that’s actually useful, unlike most of the other stuff on this site, which is mostly to show off Michael Gray’s knack for playing the most effeminate games possible. As you could probably tell by now, the world didn’t end last month. And that’s a bloody shame because I wanted to ensure there was no possibility for a sixth Home Alone movie. Now that we’re probably going to see 2013 to completion, I imagine ABC Family’s just itchin’ to get another one out for the next batch of holiday specials.

Just for kicks, I hope they get Macaulay Culkin to play as one of the robbers—wouldn’t that be a twist in the knickers for old-school fans? The guy looks freaky like Marv now, so he’d fit right in as a creepy son-of-a-gun. Then they could have another terrible videogame tie-in. But don’t let an 8-year-old program the game like last time. That only leads to wealthy children, and we can’t have those things roaming our plains.

But I’m not here to talk about Home Alone. That’s too much “mainstream knowledge” for Little Paul Franzen to handle. Nah, I’m just gonna do what I do every month and will continue to do until my contract expires…which is in about three days!?! Uh oh, shouldn’t have badmouthed Paul…anyway, I’m gonna take a look at what’s wrong with videogames. Believe me: if there’s something questionable in the land of digital amusement, I’m the guy to find it. I can find trouble in anything.

This month, I’m gonna talk about parties. No, not the kind that usually involve some mullet-sportin’ lager finagler bringing a length of hose, a funnel, and a six-pack while frat boys argue over whether “Stairway To Heaven” is better than “Smoke On The Water,” or whether they’re just smoking something especially good. I’m talkin’ about the kind that join you on quests in RPGs.

Y’know what bugs me? Let’s say you have a game where you have a party of, say, seven people. But you can only have a maximum of four people participating in the heat of battle. So what the hell are the other three doing? Watching you fight? Cheering you on? Commenting on the juicy thighs of an attractive NPC in that last town you visited? Whatever they’re doing, it’s not helping. They could easily be casting healing spells or tossing health vials your way while you slice the heads off serpents and plump imp gnomes. Yeah, I know that programming restraints were the cause of such things.

Hey, wait a minute…if you could get NINE enemies coming at you at the same time in the original Final Fantasy (for the NES, no less), then what’s your excuse 10, 15, even 20 years later? That’s right: you’re just a bunch of lazy programmers out there! At least Final Fantasy: Mystic Quest tried to hide this fact a bit by always having a character leave for one reason or another before a new member joined, ensuring you only had two fighters in your party at any time. 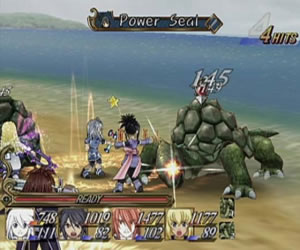 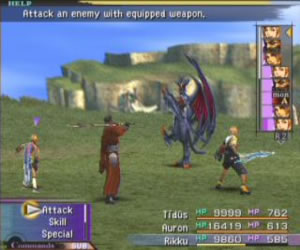 (Tales of Symphonia: You did it right. Final Fantasy X: Damn you.)

Here’s another blatant inconsistency. Sometimes those members of your party who aren’t directly involved get experience anyway, and sometimes they don’t. What gives? Take Tales of Symphonia, for example. (But not for keeps, ’cause I actually like that game.) You’ll have up to eight travelers with you, and with every battle, they all get the same amount of experience, regardless of whether they did anything useful or whether they just sat on their butts drinking Apple Gels. Other games, like Final Fantasy X, opt to make you work for those precious experience points, rather than let ’em suckle at the XP teat! Luckily, in Final Fantasy X, you can swap members on the fly, something most RPGs haven’t implemented.

For simplicity’s sake, I like the everybody-gets-something model because I don’t have all the time in the world to level grind twice as long as I really need to. Making characters battle for experience makes sense logically, though, but logical gaming takes way too much time, so the hell with that. I wish we could have a standard for this phenomenon; either everyone gets experience when just the main party fights, or we all gotta pull our own weight. Make your choice…Square Enix…

One more thing before I slink back into my sofa bed of mediocrity. I really wish I could be warned before I put 40 hours into the development of a truly magnificent powerhouse of a character, only to have them either die in a crappy plot point or leave the party so they can go off on their own mental journey or stay with a sick aunt or something. If I’m puttin’ my valuable time into your game, you better not act like a clumsy toddler and spill grape Kool-Aid all over my hard work. They sure kicked us in the Rear Admiral when they killed off Aeris in Final Fantasy VII or when Nei passed away in Phantasy Star II…what, I was supposed to include “SPOILER ALERT” in huge bold text before saying that last wedge of info? The heck with that! These games are so damn old that if you don’t know what happened by now, you probably couldn’t care less. Yeah, Aeris died. And I had put some time into building her up. Squaresoft, you have upset me. Final Fantasy VIII made my ire worse, but that’s a whole ‘nother.

That’s all I have to say for now. Be sure to come back next month for more party madness. That’ll at least give you an excuse to come back to GameCola.

Let me start by saying this: Having now played Wallace Gromit's Grand Adventures: Episode 1 - Fright of the Bumblebees on the Xbox 360, I think Telltale Games might be my new favorite videogame deve