I was recently given a totally rad assignment. Play and write a review for the NES game Totally Rad, whose radness has yet to be ranked amongst the rest of Nintendo’s library. So, just how rad is Totally Rad? Is it as “bad” as Bad Dudes? As cool as Cool Spot? As mega as Mega Man? As total as Total Recall? Does its level of radness even live up to Rad Racer? All these questions—and less—are answered right here on the ‘Cola. 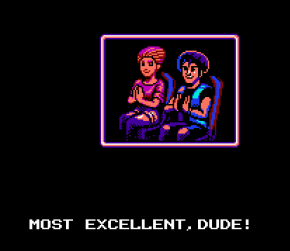 Before we can first gauge the radness of Totally Rad, we need to take a look at what this rad story is all about. The main character, Jake (John in Japan, for some reason), is studying to use magic when his girlfriend is kidnapped for unknown reasons. On his quest to rescue her, he finds out that it’s all a ruse to get his GFF’s father out of hiding because he is a man of science (which apparently doesn’t conflict with the fact that people can use magic in Jake’s world). So, it’s a mash up of the original Double Dragon and the new Teenage Mutant Ninja Turtles computer animated cartoon. That’s not particularly rad, but how much can you expect from a story for the NES? The dialog sounds like it’s taken right out of a Bill and Ted movie, and Jake looks like the bodacious Ted “Deputy Van Halen” Logan. 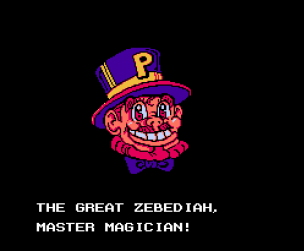 This should win the 2014 Reader’s Choice award for Best Beard.

When you watch the intro cutscene, you’ll see a bunch of disembodied heads talking to each other about learning magic, and Jake whining about having to go jogging instead of learning magic. But, he has a point: what does physical strength and endurance have to with your ability to cast magic? The dialog randomly throws in surfer talk like “totally”, “gnarly”, and the like. I guess that’s where the “rad” part comes in, but the game doesn’t take place in southern California, so it just seems really forced. Or is it? The first stage has a background of Ferris wheels. Maybe it’s the Santa Monica Pier, but…it’s clearly a forest biome with castles. The ending makes mention that Jake’s girlfriend escaped on the Hollywood Boulevard. Nothing makes sense in this game. 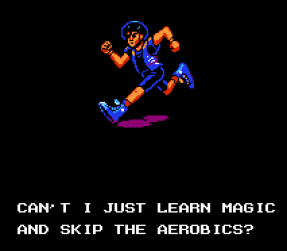 Immediately when you start to play, you’ll feel right at home if your gaming interests are aligned with Nathaniel Hoover‘s. Perhaps…a little too comfortable. This game looks and smells like a Mega Man knock off. Because, well, it is! Jake is a blue-clad individual who looks strikingly similar to Mega standing on the rooftop with his helmet off from the introduction of Mega Man 2. Jake’s main attack is a Mega Buster that can only fire 2 shots at once. It charges up like in Mega Man 4, but it’s much more annoying! In Mega Man, you are able to charge the Mega Buster up at any time—while jumping, sliding, or shooting normal shots. In Totally Rad, though, you can only charge when standing still, and not immediately after firing. You have to be standing still, and holding the B button will not fire the pellet first. It may be nitpicking, but it definitely disrupts the more natural and understood flow of Mega Man titles. 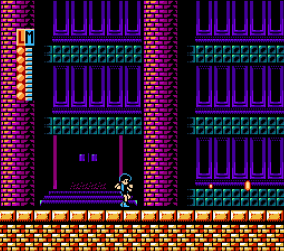 Totally Rad has these annoying hills that you have to jump on correctly or end up sliding down. What’s the point? Jake can’t slide, either, but he can duck and shoot. This is pretty handy in some cases, but I’m pretty used to being able to slide.

In the Mega Man series, Mega Man will gain his enemies’ powers as he defeats each robot master, growing more powerful as the game progresses. It really gives you a sense of accomplishment to see your abilities increase. In Totally Rad, Jake starts off with a full array of powers. Based on the intro movies, Jake literally just started learning magic. In fact, it seemed like all he was doing was running laps in a totally dark room that emits purple shadows. How is Jake already a wizard? It would make much more sense if his mentor would bestow new abilities on him as he progresses. His powers are also pretty cheesy. He has powers that replenish his health, allow him to fly, and other supernatural powers. I was getting so annoyed by the purple slopes in the first level that I thought I’d try to fly over part of the level.

As it turned out, a single cast of the flight magic was all I needed. I assumed it would be a slow draining power like the Rush Jet or Quick Man’s power in Mega Man 2. Instead, not only was I able to fly over the entire level, but after I defeated the mid-boss, I was still flying in the second area. Imagine if you could summon Rush Jet as a one-time energy fee and just traverse the entire level. It’s absurd. In fact, when I got to the boss, I wasn’t even able to revert back to Jake. I assumed that using the button used to cast the power would revert me from the bird. Apparently, you have to choose the Sneaker magic to turn back to Jake. Otherwise, you can’t cast your healing magic. So, I guess there is a bit of a penalty for changing shape. 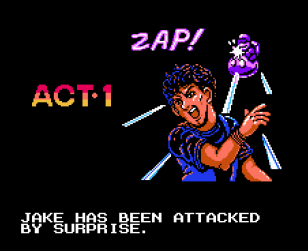 As you progress in the game, the magician Zebediah tells you that your magic is growing more powerful—but it doesn’t! You don’t get any new powers, they don’t improve in strength, and your magic meter doesn’t increase. Zebediah mentions the following towards the end of the game:

Wow, what a great message to the kids. If someone is smart, ugly and wants to learn more about your people, be sure to attack them in a gnarly way! At the beginning of Act 2, Zebediah also tells you that “some of the spells are bogus and won’t work”. Does he tell you which spells he’s talking about? Nope. A hint or riddle? Nada. Why would Zeb even teach you the spells if they’re bogus? For a game that has cutscenes and attempts to have  a story, it sure does a horrible job at it. I’m not sure if the original Japanese script was this bad or if it was a mistranslation. Either way, it is pretty horrible in English. The graphics are pretty mediocre, and the music is really drab and depressing for a game that is supposed to be gnarly and excellent. While the gameplay is certainly functional, you’ll play this all the while wishing you were playing a fine-tuned selection from the Mega Man series.

So, in addition to the usual GameCola review score below, I’m going to give this an 8 rads out of a total of 41.7 possible rads on the  rad-o-meter.

Instead of 0wning the Competition, today we'll be 0wning your Parents. We're going to do this by convincing them that you are absolutely, stark-raving mad.