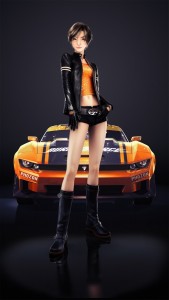 Those with more money than sense are the proud owners (and subsequently ‘dis-owners’) of the Nintendo 3DS. I do not enjoy taking a stroll into town and getting a StreetPass hit from some delinquent who sees it necessary to name their Mii after an abducted child. Oh, once again I cry and shed a tear at what our world has become, and weep silently within my own soul. How do I know that there is still evil in this world? Just look at how notoriously expensive the Nintendo 3DS games currently are.

But if there was ever a launch title for the 3DS that I would actually consider purchasing, it would be Ridge Racer 3D. Indeed, this tribute to Namco Hometek’s 1993 arcade breakthrough is the only launch title that I have currently bought for the system. With the games being as cruelly expensive as they are, I considered Ridge Racer because my experience of OutRun Online Arcade opened my eyes to how fun some of these arcade-style racing games can actually be. Considering that these series mirror each other, this was no doubt the game for me to obtain.

Ridge Racer 3D has a decent number of courses, each with harder versions that you have to race on later. In the main single player, you race in events made up of four races, each averaging out to about four minutes each. If we average this out (again) and say that it takes twenty minutes to complete a Grand Prix event (when you take into account time spent loading and picking the audio track you wish to listen to), the single player comes out at a very respectable fifty hours. The downside, though, is that the game will have thrown all the courses at you by the time you reach a third-ways through, meaning that the rest of the game is made up of the courses you have already played a dozen times already.

If you’ve played the PSP edition of Ridge Racer, then you’ve no doubt already experienced this phenomenon of repeating courses for “artificial” longevity. If you imagine how the Super Mario Kart games make you replay the same cups over and over on different difficulties, this is similar to what the Ridge Racer games do. The only difference being that the Ridge Racer games make you play fifty cups on three different difficulties, made up of the same pool of about twenty track variations. Just because racing gamers are used to this doesn’t make it right. 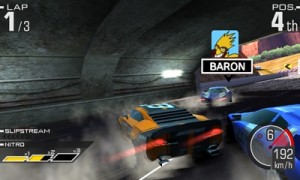 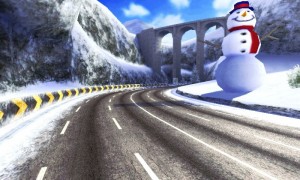 Throughout the Grand Prix mode, you can purchase new cars and upgrade their engines and nitrous abilities, helping you to procure that necessary edge whilst mid-race. You will need to start finding your feet by the time you reach 18% game progression, as the races start getting quite difficult. You need to know what area you specialize in, and beef that up accordingly. As little as two hours in, you will be eating your nails in frustration due to the viciously tough races that follow on.

One very welcome addition in the Grand Prix mode is that after any race, you can back out to the event selection screen. The game will remember what races you have beaten, and what cup you achieved, allowing you to come back later. Alternatively, you can use this feature to better the cups on harder races, where to qualify only a silver cup was required. I appreciate that Namco have considered Ridge Racer 3D to be a “portable” title by allowing us to quit back to the event selection screen and resume at a more convenient time. Also, putting the 3DS into sleep whilst racing isn’t a problem either, especially if you quickly need to do something like change train platform or put the garbage out. As soon as you re-open the 3DS lid, Ridge Racer 3D shoots straight back to life almost instantaneously and the mid-race gameplay resumes unobstructed. 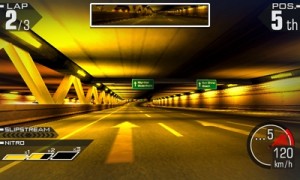 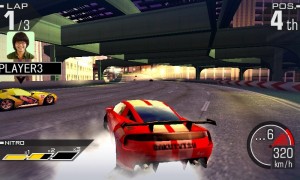 Besides Grand Prix, you can also choose to race in randomly generated tours, like the events from the main Grand Prix mode. You can also race in a standard race, or create your own race by setting parameters in the “One-Make Race” mode. One-Make Race is great for those of us with little time, allowing us to jump into racing with minimal effort. You can also Time Attack against your previous best (allowing you to save course ghosts), or play a StreetPass Duel against staff ghosts and ghosts collected via StreetPass.

In all Single Player modes, you can save replays, which can be played in the AV Player. There isn’t really any point in this feature.

Amongst versus modes, we only have offline/local multi-card Versus, which I consider a thorough disappointment. There is no reason why online play shouldn’t have been considered, especially when the game allows you to set up your own racer card with a photograph of yourself for the driver’s license photograph. Try finding another friend with a 3DS, not to mention another two (and of course, they would need a copy of Ridge Racer 3D each). That isn’t going to happen, is it? There is a ranking and records system included, but it doesn’t seem to work. Besides, not having online records or leaderboards is an absolute shambles, one of the same gripes I have with the preloaded Face Raiders.

The Nintendo 3DS is currently the most powerful handheld console when it comes to visuals. It is a shame that none of the launch titles are really pushing what the 3DS can do. That said, there are some rambunctiously exciting lighting and bloom effects employed in Ridge Racer 3D. The graphics are simple yet pretty, managing to land themselves in the Katamari category of “they’re so lazy but interesting.” Other notable “betterations” include sweet vehicle reflections and collision sparks. Another nice touch is that when driving through water you will get droplets on your screen, when driving through a wooded area leaves will gather on the screen, and when driving past the finishing post your vision will get interrupted by falling confetti. I imagine this would annoy some people, but I think it is really charming and shows what level of detail was adhered to when producing this game. Despite the enticing graphics, the frame-rate is also very good, and the 3DS doesn’t stagger like it does while playing Face Raiders. 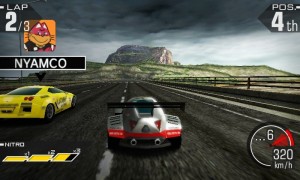 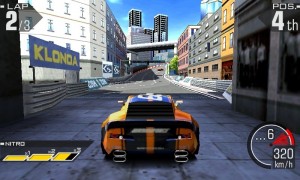 As pretty as the game may be, and for as many references as it throws to Klonoa and Splatterhouse, there is but one thing that sullies this game for me. There is a single aspect that really bugs me (isn’t there always just one niggling thing with me?). It is the same problem I have with a lot of the home releases of Konami’s Dance Dance Revolution games—the announcer/assistance voices during the game are absolutely abhor-able. The options menu allows you to turn the voices off completely, something I was hesitant to do at first, but I am now glad I did. As much as it is great to have a female voice in my ear congratulating me on the excellent drifting skills I possess, it all goes sour when she tells me I’m having engine trouble and that I’ve been owned by another driver. It is off to the options menu we go, to get the ball gag and the masking tape.

The 3D effect is fairly decent once you get used to it. Combined with the first person view (and rear-view mirror), you get a much wider scope of the race course as you are driving, making it easier to judge the distance required for each turn and drift. One thing I don’t understand is why the game is brighter while the 3D mode is turned on, but I haven’t a problem with this, as I usually play the game with the 3D effect on. There are situations that decree it impossible to play with the 3D effect on, such as whilst traveling in a moving train carriage or bus. Although the manual insists you should take a break every half hour when playing with the 3D effect, I would argue cutting it down to twenty minutes before taking a break, as it is a game that uses the 3D much more extensively and intensively than the Nintendo 3DS menus or preloaded software.

Ridge Racer 3D isn’t dreadful, nor is it excellent. It has various factors that cause me to give it praise, and various other factors that incite nothing but rage from me. It is a pretty game, it uses the 3D feature of the handheld quite effectively, and contains a diverse selection of content from the older Ridge Racer games. In conclusion, I would argue that if you somehow get bored of Ocarina of Time once it launches, and you’ve a passion for drifting around corners whilst listening to obscure club music, grab Ridge Racer 3D for a low price if you can.

What is a podcast?