Here at GameCola, we take our PAX East coverage very seriously. Our primary goal is to inform you, so we make the trip to the Boston Convention and Exhibition Center, we get to the floor early, we scout out where all the biggest games are—Assassin’s Creed, The Last of Us, Elder Scrolls Online—and then we walk right past them to play games in which you virtually drink soda or to collect an armload of Plants vs. Zombies plushies.

Videogaming as a spectator sport was a large part of the convention this year, with Twitch.tv having one of the larger booths dedicated to it, but companies like Kingston, Nvidia, Ubisoft, and Riot Games were also in on it, streaming live play of games like Smite, Starcraft 2, and League of Legends while being commented on by dudebros who use the term “pwn” verbally and unironically or the Frag Dolls, two groups of people who I would rather wear klaxon earbuds made of razorblades than listen to for an extended period of time.

Another big thing at PAX East was a surge of free-to-play games taking up some of the very largest booths on the floor. Dungeons & Dragons: Neverwinter, Eve Online, Eve Dust 514, League of Legends, Marvel Legends, and Wildstar—and those are just the ones I can remember off the top of my head. 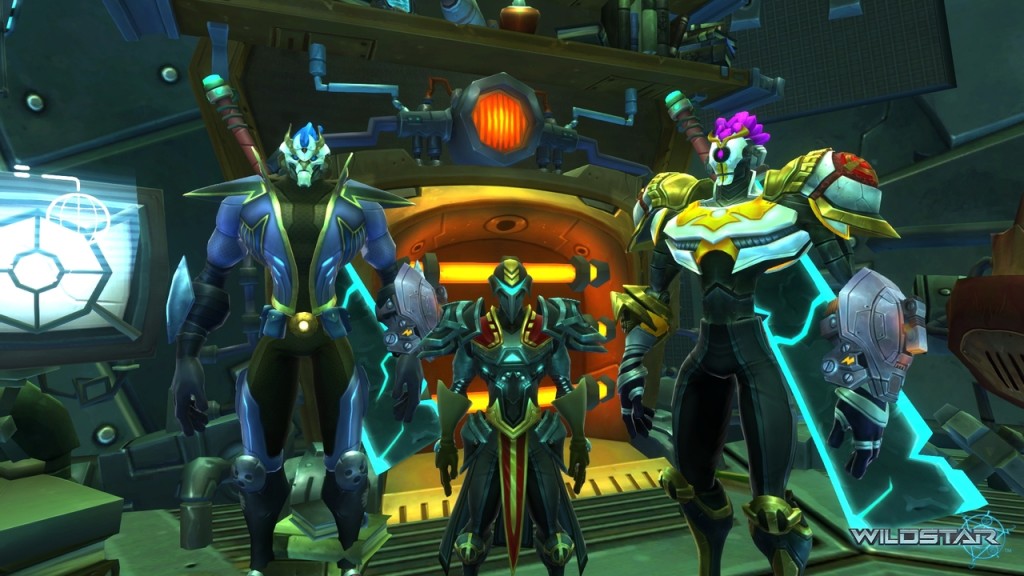 As for specific games:

The way Assassin’s Creed IV: Black Flag was described it looked like a cross between Sid Meier’s Pirates! and Far Cry 3. Considering I like both of those games better than any Assassin’s Creed game so far, I will consider this a step in the right direction.

Watch Dogs looks like it really has the potential to be amazing in its complexity, which just makes me very skeptical it’s going to be executed properly. I remain hopeful.

Line management seemed a bit more strict at this year’s PAX, where instead of wrapping lines around booths 17 times, they were only a fraction of the size and a PAX Enforcer stood at the end of it to inform you that the line had been capped. The only way to get into the line was to be in the right place at the right time when a few spots in the line opened up. Unfortunately it just wasn’t in the cards for The Last of Us and I never was near the booth when the line was opened, so I never got to play it.

Nintendo is really pulling out the big guns to get you to buy Animal Crossing: New Leaf. It turns out this new Animal Crossing game will not only let you purchase a shirt and pants, but also you’ll be able to spend those hard-earned bells on socks. It’s important to note that it’s not just me pointing out stupid little features for comedic effect, but Nintendo’s own promotional video highlighting them. Sure, you can’t dig up all the fun old Nintendo games of the first AC game, but if socks aren’t enough for you to buy this game then, really, what the hell do you people want from Nintendo?

A big hit of the show was a game you may be familiar with. In a throwback to the NES, people lined up to play a game where you collect treasure and pogo to death anything that might stand between you and your quest for riches. Yes, Shovel Knight looks to be an excellent game, blending elements of Castlevania and Zelda II together to make what looked like a fresh, fun new indie game. Oh, also it was kind of like this other game that was being shown… 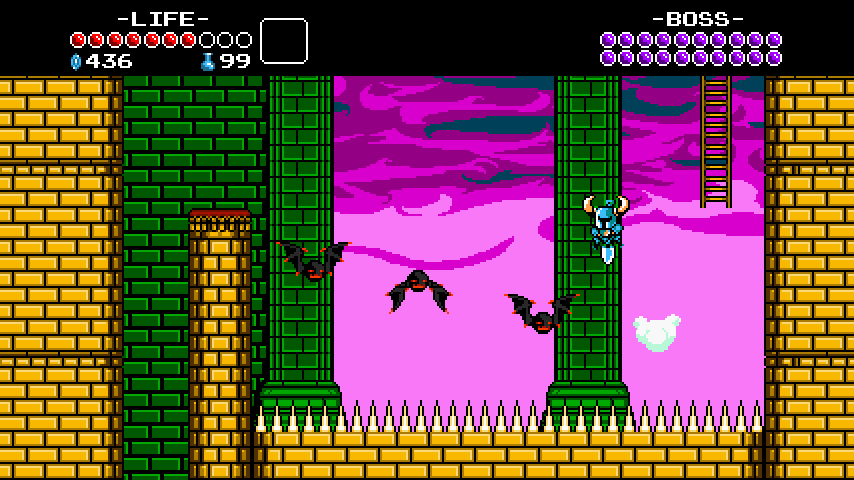 DuckTales is being remastered and re-released by Capcom, a fact that Michael Gray, whose knowledge of DuckTales news borders on precognizance, scooped me on despite him being three time zones away and me being in the same building where the announcement was made. I got some hands-on time with it and can confirm that it looks great and was still a lot of fun. Cinematics with the original DuckTales voice cast pop up throughout the game, which is cool if you’re a huge fan of the show, but it can be a bit intrusive when you’re just trying to pogo off of Beagle Boys and mummies. Thankfully all the cinematics I ran into were skippable if you’re just not into it. 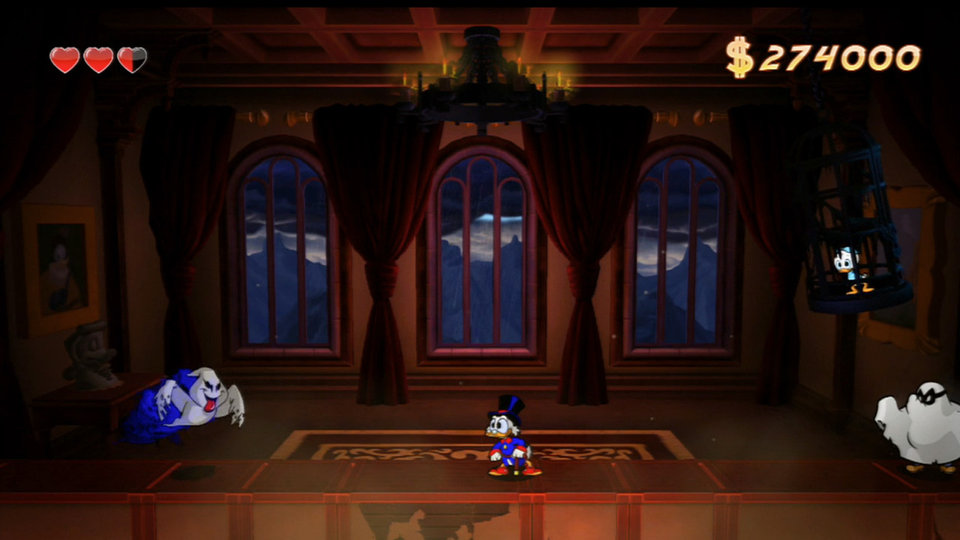 I didn’t know how interested I was in Monsters Invade: Oz. Really, it’s an iOS game, so I knew I wouldn’t be able to play it but, damn it, I wanted one of their promotional bright orange inflatable sticks with Nicholas Cage’s face on it, so I played it just to get one. Turns out it was pretty fun, like a weird, casual Pokémon game. In fact, one of the developers described it to me as being “kinda like Pokémon, but I hid dicks in the art.” INSTANT MASTERPIECE, I thought, then he continued “and added a lot of dubstep.” That deflated my enthusiasm down to manageable levels. Still, a pretty fun little game if you’re in possession of some kind of iDevice. I hope to see it on Android some time.

I didn’t get a good look at too many other indie games, because I spent the majority of my time hovering over the Popcap booth, greedily hoarding Plants vs. Zombies plushies, so I’ll hand this over to Paul, who may have a lot more information about the indie games there and his PAX experiences, but his hoard of plush sun mushrooms and walnuts pales in comparison to mine. 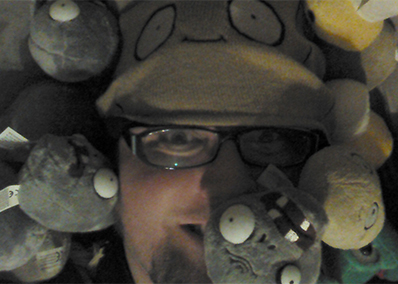 Bow before my army of plush zombie heads, mushrooms, and walnuts.

Wait, they had zombie ones, too?! I just got the one that looks like a potato! I think I hear one of my bunnies chewing it up in the other room right now, actually.

I wasn’t able to get to PAX until Sunday, so while a lot of the best swag was long gone, at least the crowds were a lot thinner and there was a lot more room to walk without bumping butts with Sexy Cloud Strife and—

Hah-hah! I am a card. It actually looked like this: 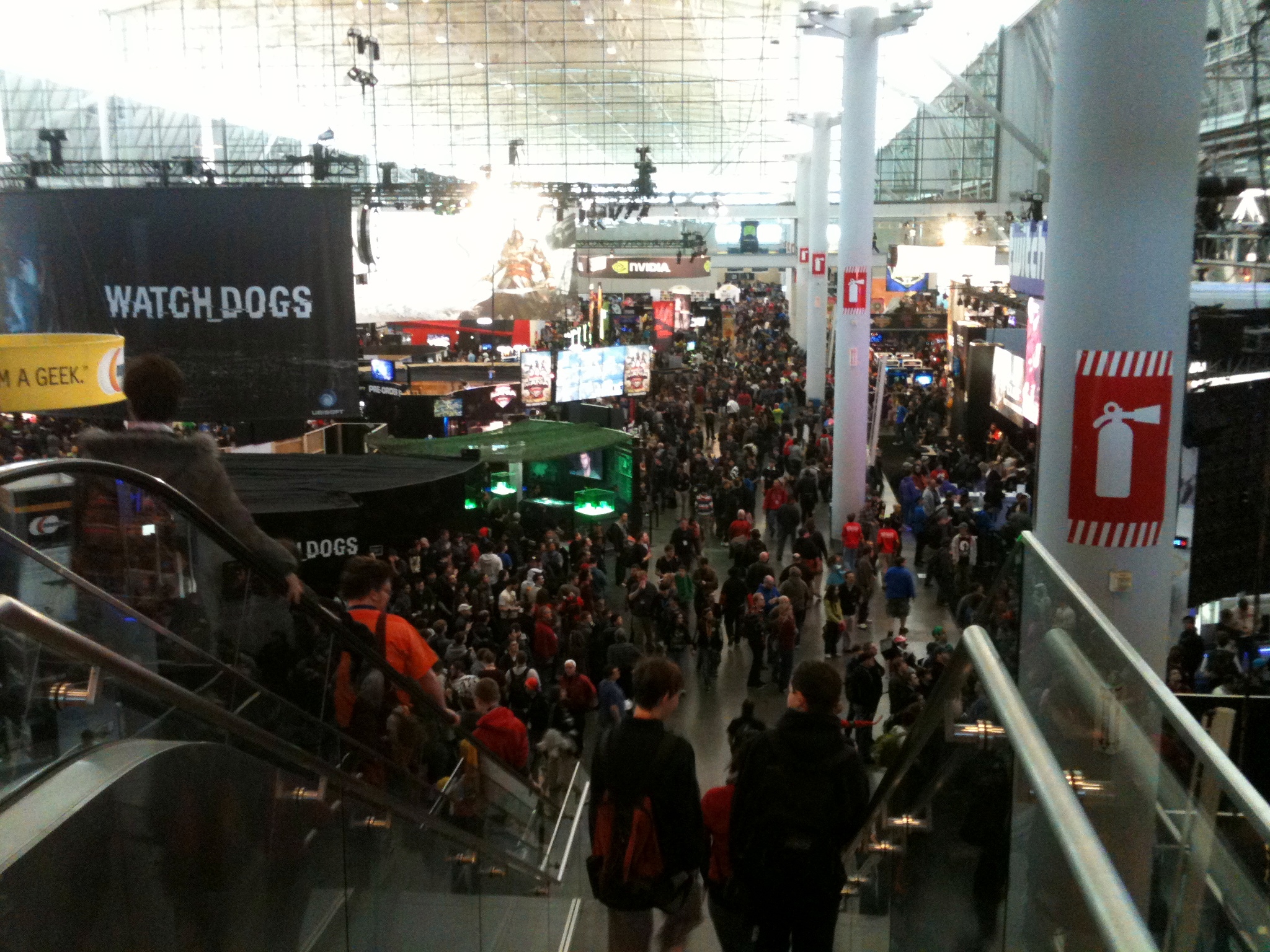 Seriously, ten minutes after they opened the door.

I spent my day weaving in and out of PC demonstration booths showcasing the fact that racing games apparently haven’t advanced a day since Micro Machines on the NES, and people high up on stages just throwing whatever swag they had left down at the peasants below them; but time and time again I kept going back to the indie booths. They were small and intimate. The lines were short, so you didn’t feel bad just sitting down with your headphones and keyboard to play a game for 15 minutes; there weren’t any stinky nerds behind you coughing pointedly about how maybe you should give someone else a turn. The devs themselves were accessible—any time I’d ask “so what was your part in this game?” they’d just say “I’m the developer,” period. They weren’t just PR drones or booth babes; after three straight days of doing nothing but talking with people about their games, they were still super excited to do so. It was inspiring. I wish all of PAX was just the indie section.

That said, a lot of the games themselves weren’t quite so inspired. A lot of iOS puzzle games about moving things around with your fingers, a bunch of “retro” side-scrollers that were virtually indistinguishable from one another, and not a single point-and-click adventure game. I was SO READY to bro out with some fellow point-and-clickers, but the closest I came to that was almost blinding Tim Schafer with my business card following the Broken Age (nee Double Fine Adventure) panel. Too bad.

Here’s what I did see that might be worth a Google or two, though:

• Journal, which was sold to me as a visual novel, except that instead of clicking through screens to advance the story, you’re running around talking to people and jumping on things. It’s a game about a girl reflecting on her life experiences in her journal; you don’t get to necessarily choose what’s happened to her or how her life plays out, but how she chooses to remember it. A game about self-reflection might sound a little artsy fartsy, but at least I wasn’t just eating soup.

• Two Brothers, which, although I didn’t get a chance to play it, despite all my stinky nerdy pointed coughing, ended up being one of my Games of the Show, because it’s a Game Boy-style action RPG starring an inventor who dies, goes to heaven, comes back and is totally obsessed with bringing all the otherwordly color he’s discovered back to his own home.

More importantly though, they had a giant Game Boy: 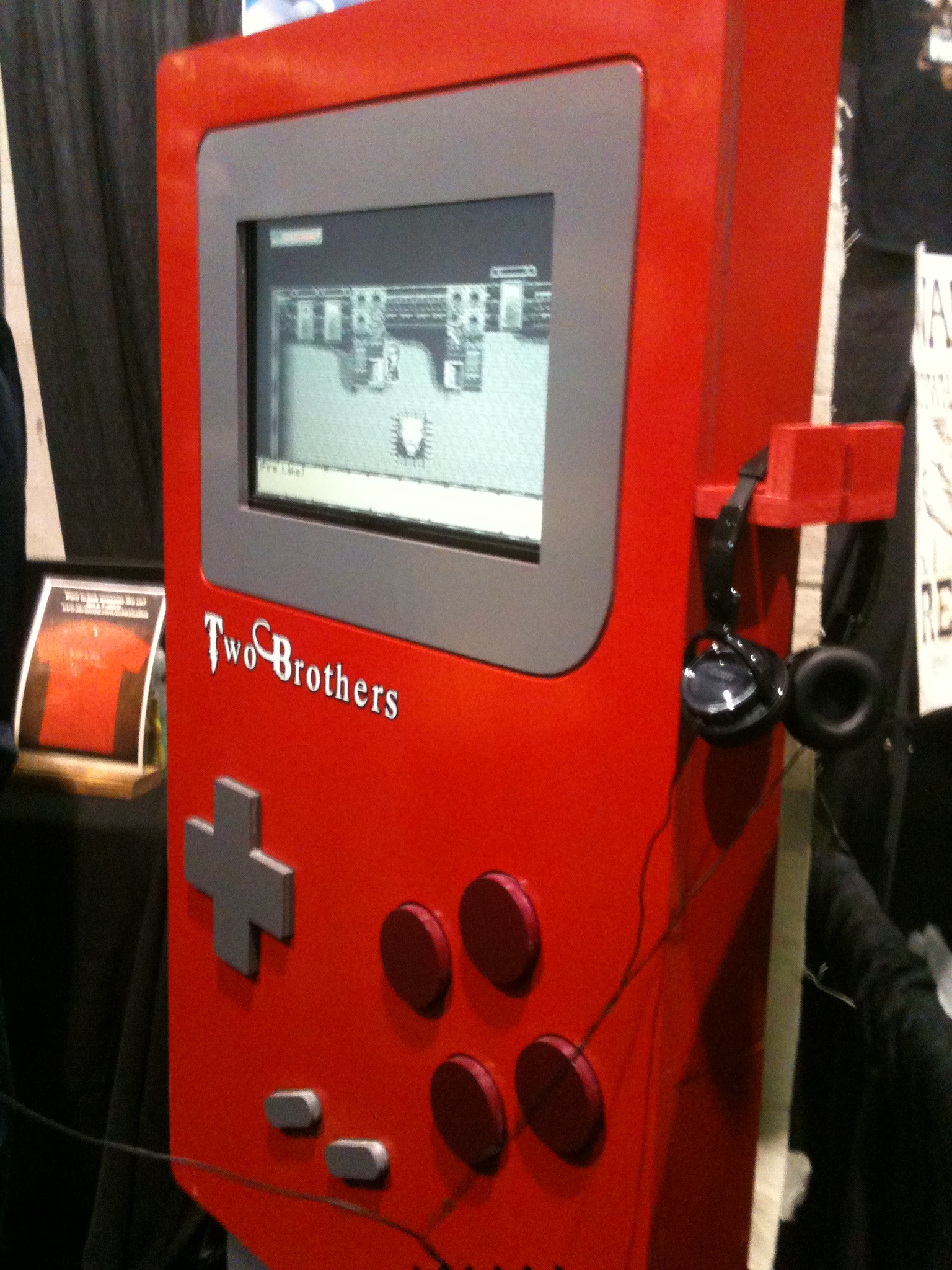 • Lights, Camera, Party!, a WarioWare sort of party game for the PlayStation Move where you do things like play Whack-a-Mole, rip tentacles off of a plant and throw them against the wall, and get made fun of by the developers for sucking at the clock-winding minigame. (We showed them, though; my wife ended up beating one of ’em when she played.)

• Lords of New York, a PC/iOS RPG set in America’s prohibition era that replaces tedious turn-based combat with—what else?—poker. This was actually a running theme at PAX, RPGs replacing random encounters with something a little more exciting than dicking about with menus. I saw another RPG that replaced combat with Dr. Mario-style puzzles. …Actually, I didn’t so much see it as get barreled over by someone screaming “IT’S AN RPG WITH DR. MARIO, HEY, IT’S AN RPG WITH DR. MARIO!!” I think he was on the dev team.

• Octodad: Dadliest Catch, whose booth I stopped by no less than three times to gush about how much I love the original Octodad, because I’m a serious videogame journalist. Further proof: 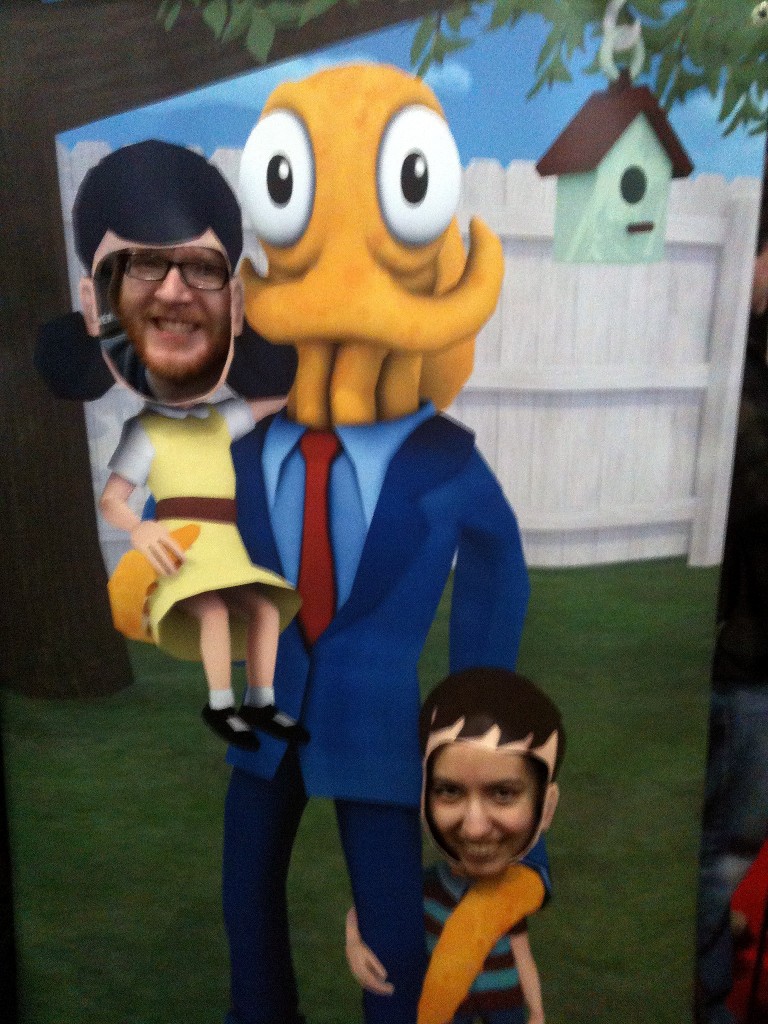 Don’t tell my wife I posted this on The Internet.

Once again the lines were too long each time I stopped by, so I didn’t get any hands-on. I did, however, see someone playing as the titular “secret octopus” during his own wedding ceremony, and later stuffed inside a supermarket freezer apparently being sold as an entree. I also got a GAMECOLA-EXCLUSIVE SCOOP: …they’re not really working on a Kinect version of Octodad anymore. Sorry, guys.

• And, finally, Girls Like Robots, a puzzle game that combines all the fun of setting seating arrangements with STOP RIGHT THERE, I’M SOLD. That’s really what the game is: You’re told things like “girls like robots, nerds like girls, but nerds don’t like other nerds,” and you have to figure out how to seat everyone for maximum happiness. My wife got wedding nightmare flashbacks; I just wanted to keep playing. Luckily, I can, because it’s already out.

It was my first PAX East; it was a good PAX East. If you’re reading this, I’m sorry Tim.