If it were anything other than Mega Man, I would have stopped already. Mega Man 10, no matter how many extra challenges and game modes there may be, is only worth replaying for nearly two months straight if you love the game. Because I’m a hopeless Mega Man fanatic, and because I wanted to write a truly comprehensive review of Mega Man 10, I made it a point to play the game into the ground–at this point, I hope it stays buried there a while. 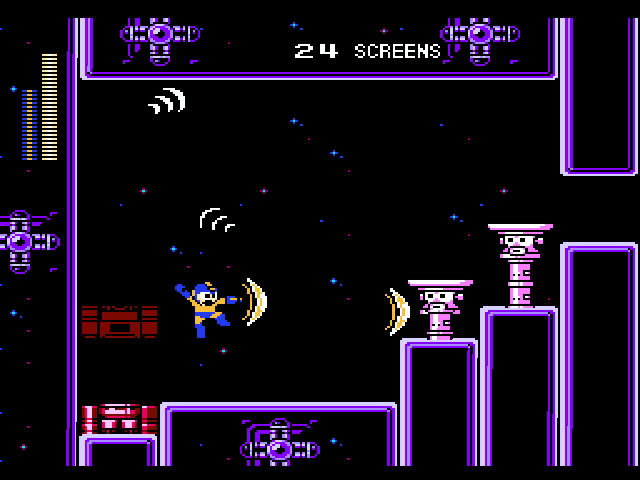 I played through the game seven times–once each on Easy, Normal, and Hard modes as Mega Man and Proto Man, plus a slow-motion run solely for the sake of getting screenshots. I’ve revisited every stage from the regular game at least once in Time Attack mode, paying no attention whatsoever to actually attacking the time, for I feel that Mega Man is best enjoyed when you’re not doing a speed run. Though any of the achievements I’ve earned have been incidental, I have made multiple attempts on every standalone challenge and, at the time of writing this, have completed 77% of the extraneous challenges.

In the past two months, I’ve spent more time playing this one Mega Man game than I’ve spent bathing. Which is impressive, considering how much time I’ve spent trying to wash away this disgusting feeling that I’ve been wasting my life. 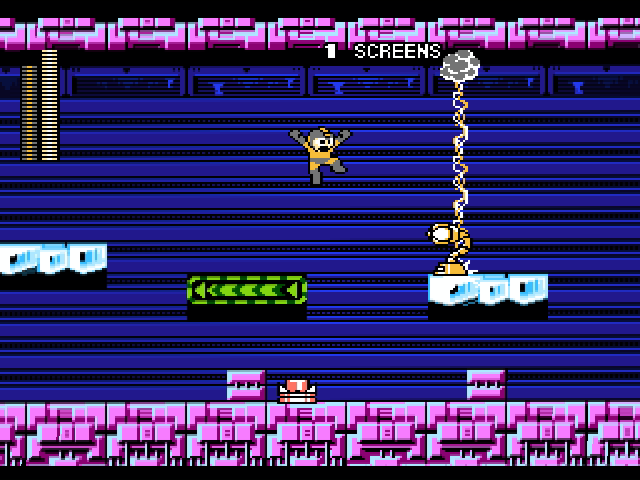 With all this replay value already built into the game, it seems almost unnecessary for Mega Man 10 to have any downloadable content. However, with great disappointment comes great anticipation, so I found myself cautiously looking forward to MM10’s DLC, secretly and foolishly hoping that an additional playable character, three more stages, and an Endless Attack mode would boost my opinion of the game.

If you have mixed feelings about a casserole, and you have another helping of casserole to see if you like it any more or less, don’t be surprised if it tastes exactly the same. The only reason you’d like it any less is because you’re getting sick of eating it. If you start to like it more, that’s called Stockholm syndrome. 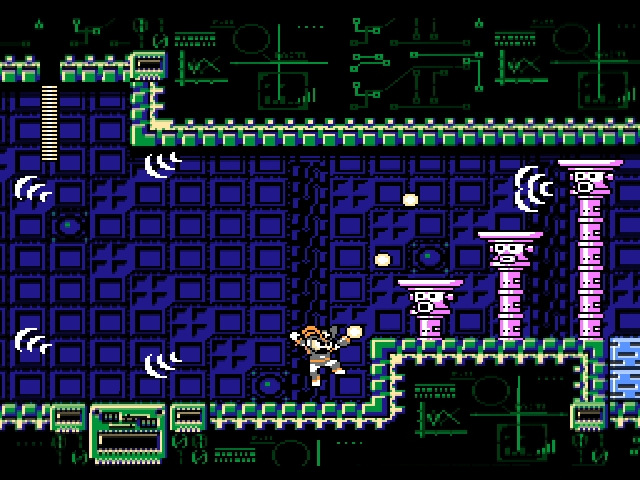 In other words, the downloadable content does absolutely nothing to alter my opinion of Mega Man 10. The DLC is fun enough, but as with the rest of the game, the successes don’t overcome the shortcomings by too big a margin. Factor in my waning interest in this game, and no amount of added replay value can hoist my rating for Mega Man 10 higher than a little above average.

That’s not the only disappointing part about playing as Bass. Specifically, he’s got the dorkiest sprite in Mega Man history. 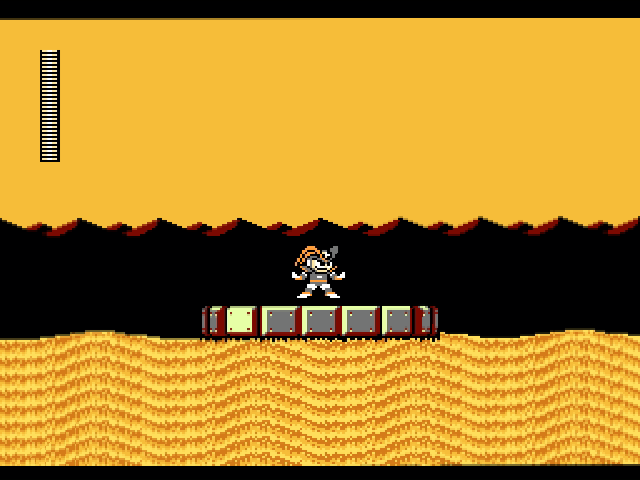 I understand that Bass has facepaint and a helmet with giant wings on it that are difficult to express in ample detail with such relatively simple graphics, but he looks like a lazy sprite hack of Mega Man, or like Mega Man dressed up as Bass for Halloween. The more I think about it, the more I’m convinced that it’s the graphics themselves and not the character designs that are so unappealing to me. Bass may be an aesthetic letdown, but he’s a gameplay triumph. 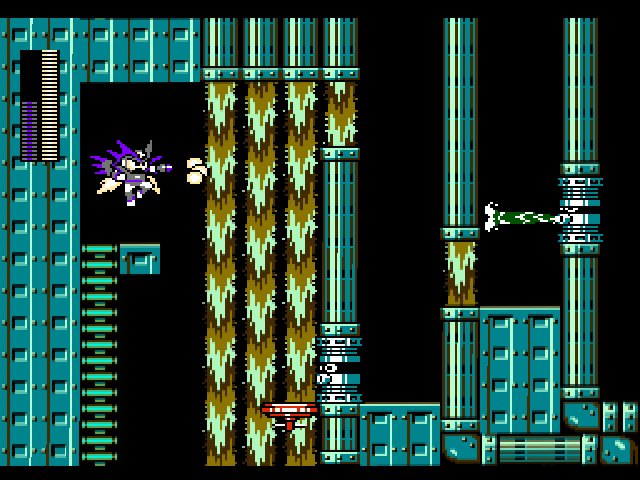 In contrast to the frustratingly unplayable Proto Man, the drawbacks that are intended to balance Bass’ fantastic abilities actually make sense. Bass can rapid-fire, but his shots do half the damage. He can shoot in almost any direction, but his shots can’t pass through walls, and he can’t run while firing. His Rush-ripoff animal pal, Treble, transforms into a flight suit that can hover and travel in any direction, but this consumes weapon energy at a substantial rate. Bass isn’t punished for being awesome; his drawbacks are directly related to his cool abilities. It is flat-out fun to play as Bass. 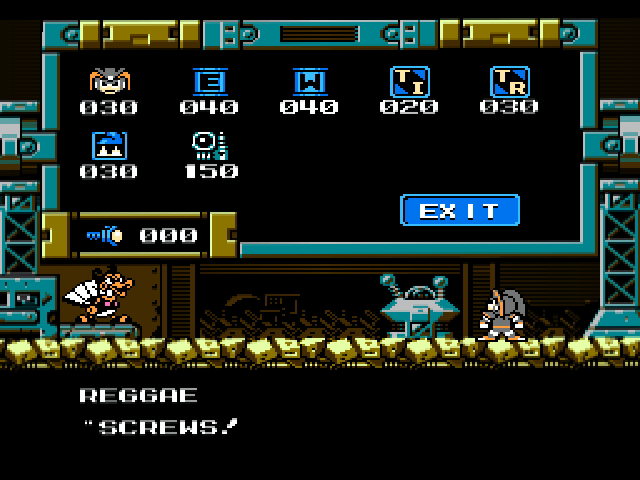 Bass Mode also gets bonus points for including Reggae, an obscure Mega Man character who nobody has ever heard of, as the shopkeeper for Bass. If there’s one thing Mega Man 10 does well, it’s referencing other Mega Man games. While we’re on that subject, let’s take a look at the…

Mega Man 10 offers three special Time Attack stages that should look awfully familiar if you’ve played the Game Boy games; the three stages are faithfully recreated mashups of levels from Mega Man: Dr. Wily’s Revenge, Mega Man III, and Mega Man IV, respectively. At the end of each stage you’ll face off against the Mega Man Killer boss robot from the appropriate game, and upon defeating them, you will gain their special weapon, which you can use in any Time Attack or Challenge stage, as well as the main game. I initially complained about the big gaping space on the menu screen–well, these three new weapons fill those spots quite nicely.

Of course, it would have been nice to know about this before I played all the Time Attack stages, beat all the challenges, and completed the game with three different characters on three increasingly unpleasant difficulty modes. 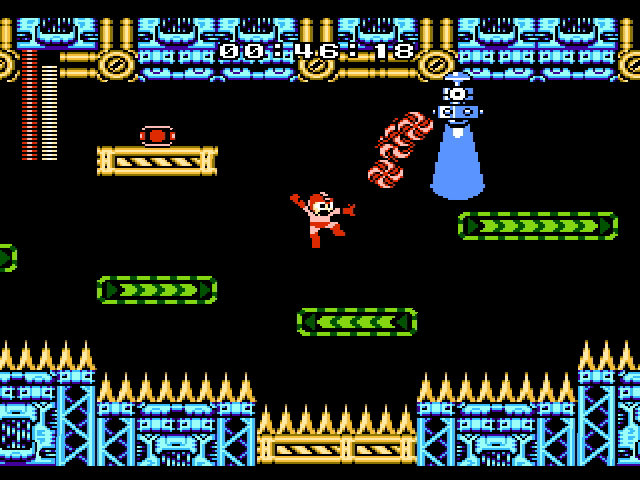 While I’m ecstatic that the Game Boy Mega Man games finally got some recognition and that the portions of the levels that got used were replicated in such close detail, the particular levels that were chosen are some of my least favorites from the Game Boy series. There are sections here and there that I enjoy, but there are only so many “obnoxious enemy popping out of a hole” traps that a person can stand. It’s a challenge to get through each of the stages on just one life, but once you’ve done it, there’s not a whole lot of reason to replay the stages. 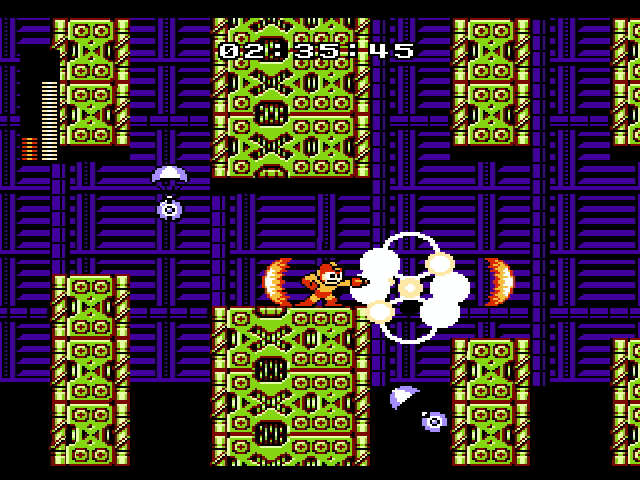 Two of the three weapons are fun, though. Enker’s barrier weapon deflects projectiles more reliably than Proto Man’s shield, and Punk’s throwing blades have a surprisingly useful attack trajectory. Ballade’s multidirectional bombs are powerful yet slow, and they feel a little redundant given that Mega Man already has access to Strike Man’s multidirectional bouncy ball, which I only mention because they could have traded Ballade for Quint from Mega Man II, who rains destruction on his enemies from atop a terrifying pogo stick. 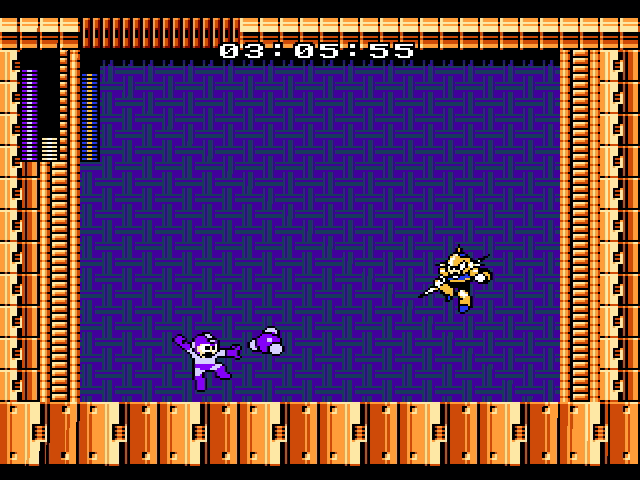 Actually, now that I’ve had a chance to play a little more, Ballade’s weapon is powerful enough to be quite useful against several irritating enemies, so all three special weapons are fun. Hooray.

Mega Man 9‘s downloadable content introduced Endless Attack mode, which did more for the game’s replay value than a difficult special stage, an additional and difficult-to-use playable character, and two more-difficult versions of the main game ever could. Ironically, I spent less time on Mega Man 10‘s Endless Attack mode than on anything else.

As before, you play as Mega Man through a randomized series of short stages that are comprised of enemies and obstacles from all over the main game. The level designs are pretty clever, but the choice of enemies leaves something to be desired, as the designers went overboard with placing the most annoying enemies in the game in as many locations as possible, almost to the exclusion of literally half the enemies in the game. 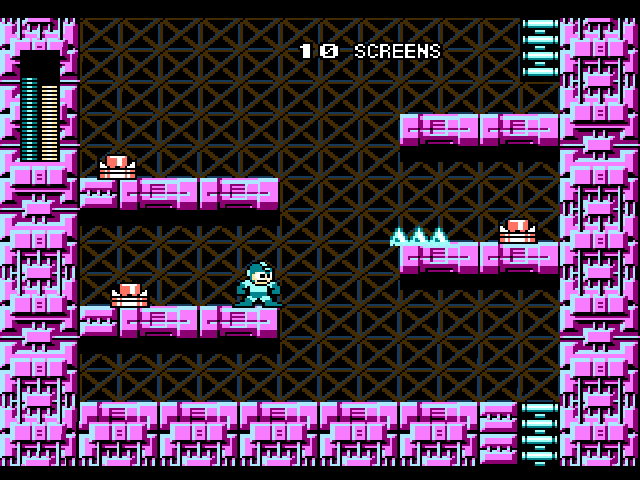 I’m pleased to report that there are many screens and areas that were clearly intended to resemble parts of previous games–there’s references to Elec Man from MM1, Bubble Man from MM2, the first Dr. Cossack stage from MM4, the second Proto Man stage from MM5, Blizzard Man from MM6, Plug Man from MM9, and more. There’s also an absurdly complex disappearing brick challenge that makes me very, very masochistically happy. 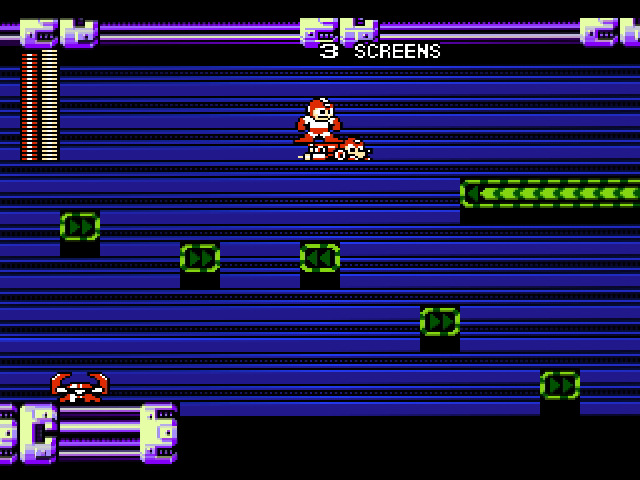 I enjoyed Mega Man 9‘s Endless Attack mode because it is very much a game of endurance and resourcefulness–special weapons are the key to success, and when you start running out of weapon energy you need to become especially skillful and clever to survive. Mega Man 10‘s endless attack mode is more about avoiding bonehead mistakes; you’re unlikely to deplete your weapon energy enough for it to be a problem, so it’s a matter of not bravely leaping into a pit of spikes or getting hit too much by the same five enemies that populate almost every area. 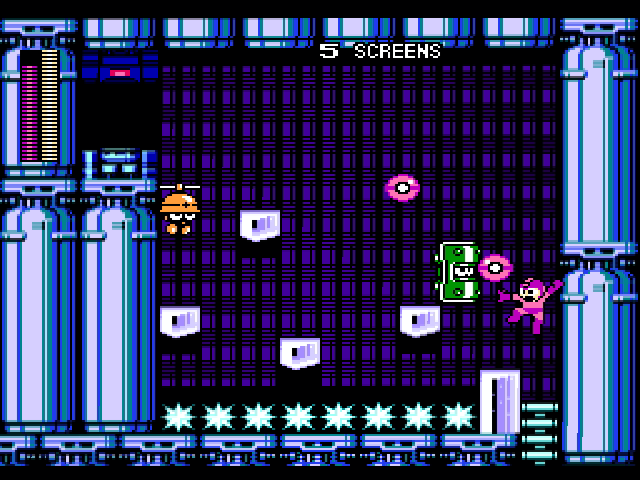 Also, the Endless Attack music is a pale imitation of MM9‘s technoriffic theme. Worse yet, it starts off with some high-pitched whistling that honest-to-goodness made me wish for the soundtrack from Mega Man II. The Game Boy one.

In other words, after just a handful of tries, I’ve played about all of MM10‘s Endless Attack that I care to play for right now. 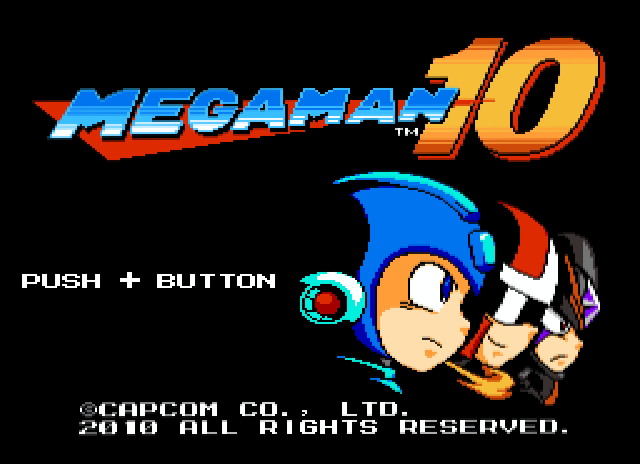 The downloadable content for Mega Man 10 doesn’t greatly enhance the replay value of a game that’s already got impressive replay value, but it’s worth it to check out at least one of the special stages and/or the Endless Attack mode, and I have a strong suspicion that I’ll be playing as Bass in most of my future playthroughs. The DLC is just as underwhelming as the main game, but, like the main game, it has its shining moments that make it worth playing.

[Reprinted from Exfanding Your Horizons.]